As this article is being written, it is estimated that around 3.22% of the total energy consumed by the act of writing this article, comes from India’s
Nuclear power reserves. Nuclear energy, in a controlled form first made its debut as an energy alternative on December 2, 1942, when the research reactor known as Chicago Pile-1 achieved self-sustaining power. Today, about 10% of global electricity generation is accounted for by Nuclear Energy, which becomes a healthy 20% when one only looks at the United States’ power usage.

India’s nuclear power sector was coddled by the government because it served the dual purpose of providing the capacity to produce nuclear weapons and also the promise of limitless sources of energy. This was premised on Homi Bhabha’s
three-stage plan that involves making fast breeder reactor (FBR) to use plutonium reprocessed from the spent fuel from the first stage PWHR plants.

Stage 2 FBRs will use a mixed oxide fuel to produce more plutonium than they consume. In Stage 3, thorium would be used to blanket the reactor to yield Uranium 233 for the third-stage reactor, which can be refuelled by abundant natural thorium after its initial fuel charge.

Nuclear energy received the bulk of the government’s research and development (R&D) funding during the 1950-1970 period. It got around 15 per cent in the 1990s, at a time when the Indian Space Research Organisation (ISRO)
got 20 per cent and renewables got less than one per cent. Even then, Nuclear power is only the fifth-largest source of electricity in India after coal, gas, hydroelectricity and wind power.

Costs of establishing a Nuclear energy-based industry are high too. In the dawn of the nuclear era, the cost was expected to be one of the technology’s
advantages, not one of its drawbacks. The first chairman of the Atomic Energy Commission, Lewis Strauss, predicted in a 1954 speech that nuclear power would someday make electricity “too cheap to meter.”

Half a century later, we have learned that nuclear power is, instead, too expensive to finance. The first generation of nuclear power plants proved so costly to build that half of them were abandoned during construction. Those that were completed
saw huge cost overruns, which were passed on to utility customers in the form of rate increases. By 1985, Forbes had labeled U.S. nuclear power “the largest managerial disaster in business history.”

The industry has failed to prove that things will be different this time around: soaring, uncertain costs continue to plague nuclear power in the 21st
century. Between 2002 and 2008, for example, cost estimates for new nuclear plant construction rose from between $2 billion and $4 billion per unit to $9 billion per unit, according to a 2009 UCS report, while experience with new construction in Europe has seen costs continue to soar.

Nuclear power - A policy challenge or a safety issue?

In 2010, the controversial Nuclear Liability Act was passed in both houses of the parliament after facing severe criticism from the opposition. The Act aims to provide a civil liability for nuclear damage and prompt compensation to the victims of a nuclear incident through a no-fault liability to the operator, the appointment of Claims Commissioner, the establishment of Nuclear Damage Claims Commission and for matters connected therewith or incidental thereto. This was one of the last steps needed to activate the 2008 Indo-U.S. civilian nuclear agreement as the US nuclear reactor manufacturing companies required the liability bill to get insurance in their home state.

The government had encountered fierce opposition when trying to push this bill through parliament on several occasions. This is because it contains several controversial clauses that the opposition parties claimed to be ‘unconstitutional’. The opposition believed the bill was being pushed through due to US pressure though this was denied by the government.

The most primary point of opposition to this act was the amendment it made to the Atomic Energy Act of 1962, allowing private investment in the Indian Nuclear Programme. India, being a country that still retains some socialist and bureaucratic norms in spite of being a liberal economy, this was a problem. Handing over the responsibility of such a large country’s nuclear programme over to foreign corporations meant less accountability on the part of the corporation in case of a disaster.

On 2nd December 1984, a gas leak incident at the Union Carbide India Limited’s Pesticide Plant in Bhopal took at least 3800 lives, and several more were claimed to be dead. UCC being a US company is another point of hesitation for Indians to allow foreign, especially US intervention in the Indian Civil Nuclear programme. In a country as densely populated as India, losses both in terms of property and lives would be a thousandfold compared to the 2011 Fukushima Disaster in Japan.

The question that pops up here is: Is this foreign intervention a diplomatic luxury, or an R&D necessity that’d help India bridge the gap it itself can’t.

India is still in its nascent Stage-I of its 3 Stage Nuclear Plan. Its long term goal is to develop an advanced heavy-water thorium cycle which does not seem to be happening anywhere in the near future, given the track record of Nuclear R&D in India. The department of atomic energy (DAE) could not scale up the 220 MWe Canadian reactors it had got in the 1960s to 700 MWe. We have just about managed to start a 1000 MWe reactor in Andhra Pradesh’s Kakrapar in 2018 while the world norm for power reactors is 1,000-1,500 MWe. India still uses Pressurised Heavy Water Reactors (PHWRs) which are costly and technologically behind the cheaper LWRs (Light Water Reactors). At the same time, LWRs imported from other nations are far costlier than the ineffective PHWRs.

All of this points towards India’s sticky position - it can’t fully embrace indigenous development of nuclear power yet, due to lack of technology and failure
to meet safety standards, and it also can’t fulfil its energy requirements from other countries - either due to outdated and out of place policies, lesser disposable finances, bureaucratic norms and public sector monopoly. In a letter dated 27 June 1961, Nehru expressed his annoyance at the criticism of India’s economy as “post office socialism”. The phrase was coined by Galbraith, a renowned economist who also served as the US ambassador to India, whose definition of India’s public sector enterprises as firms which “operated at no profit, hopefully, no loss, with no particular efficiency and with no clear purpose in mind” fits NPCIL almost perfectly. Decades later, the burden of a public sector monopoly in atomic power is certainly obvious.

The Three-Stage Nuclear Programme and the case of Thorium

In the now-famous ‘three-stage nuclear programme’, first coined by legendary physicist Homi J. Bhabha, the roadmap laid out what needs to be done to
eventually use the country’s almost inexhaustible Thorium resources. The first stage would see the creation of a fleet of ‘pressurised heavy water reactors’, which use scarce Uranium to produce some Plutonium.

The second stage would see the setting up of several ‘fast breeder reactors’ (FBRs). These FBRs would use a mixture of Plutonium and the reprocessed ‘spent Uranium from the first stage, to produce energy and more Plutonium (hence ‘breeder’), because the Uranium would transmute into Plutonium. Alongside, the reactors would convert some of the Thorium into Uranium-233, which can also be used to produce energy. After 3-4 decades of operation, the FBRs would have produced enough Plutonium for use in the ‘third stage’. In this stage, Uranium-233 would be used in specially-designed reactors to produce energy and convert more Thorium into Uranium-233—you can keep adding Thorium endlessly.

Seventy years down the line, India is still stuck in the first stage.

For the second stage, you need the fast breeder reactors. A Prototype Fast Breeder Reactor (PFBR) of 500 MW capacity, construction of which began way back in 2004, is yet to come
on stream.

The problem is apparently nervousness about handling liquid Sodium, used as a coolant. If Sodium comes in contact with water it will explode, and the PFBR is being built on the humid coast of Tamil Nadu. The PFBR has always been a project
that would go on stream “next year”. The PFBR has to come online, then more FBRs would need to be built, they should then operate for 30-40 years, and only then would begin the coveted ‘Thorium cycle’! Nor is much capacity coming under the current, ‘first stage’.

In contrast to nuclear power, India has usually exceeded its targets, at far lesser investment, in the area of renewable energy. The country’s installed wind-power capacity is 34,000 MW, hydropower 44,000 MW and solar power 25,000 MW, with a target of 100,000 MW by 2022. Wind and solar power have not been provided with the kind of investment that has been made in nuclear energy. Around the world, nuclear energy has taken a back seat because of the risks that reactors bring with them. Three Mile Island, Chernobyl and Fukushima have dampened the ardour of the developed world. The US, which has over 100,000
MWe capacity, stopped issuing licences for nuclear plants between 1979 and 2012. Even now, just two are under construction, while 34 have been shut down.

The global slowdown in the Civil Nuclear Race has its roots in the Chernobyl and Fukushima disasters, following which several power plants in Germany and France were either shut down or had their output capacities reduced. Even though in itself Nuclear energy is a clean form of energy, the entire industrial process, also known as the “Nuclear Cycle” starting from its mining till the moment the reactor is started, is very precarious. These kinds of hazards ask for better prevention systems, which further increases the already high costs of establishing a nuclear power plant.

In the Indian context, due to lesser available funds, more opposition both politically and by social groups residing around power plant facilities and more restrictive policies mean that it’ll be a long time before India finally enters Stage II of its Three-Stage Plan. Till either the tangle of bureaucracy or the technological backwardness starts receding, we cannot expect to make Nuclear power a sustainable energy alternative. 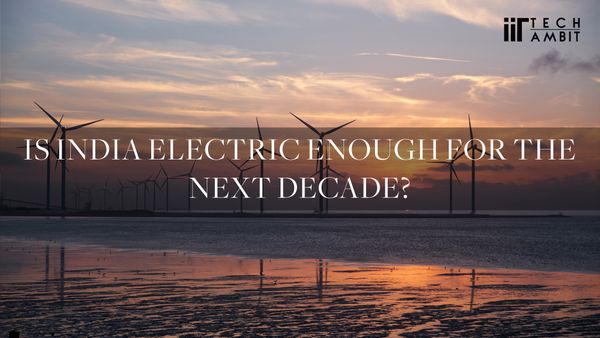 India is aiming for a 30% shift to EVs by 2030. With the lack of charging ecosystem, expensive costs of EVs over ICs, and a fear of job losses due to aggressive policies, wil India be electric enough to meet its Paris Agreement goals?

Silicon Valley has long thrived on the trend that transistor sizes will reduce to half their sizes every two years- Moore’s Law. Now that it finds itself facing a dead end, will it be able to embrace a newer “law”?