Dr. Aloknath De is the CTO and Corporate Vice President of Samsung R&D Institute, India. During this year’s Global Entrepreneurship Summit at Indian Institute of Technology, Kharagpur, Suraj Iyyengar from IIT Technology Ambit had the opportunity to interact with Dr. Aloknath De and had an interesting conversation about his views on technology, industry-academic collaborations and the importance of solving multi-disciplinary problems

Dr. Aloknath De finished his B.Tech in Electronics and Communication Engineering from Indian Insitute of Technology, Kharagpur, M.Eng in Computer Communication from Indian Institute of Science and a Ph.D. in Signal Processing and Communication from McGill University, Canada. He has also been an AICTE-INAE Distinguished Visiting Professor at IIT Roorkee and an Adjunct Professor at IIT Delhi. Before Samsung, he has also held the position of Director at ST-Ericsson and Hughes Network Systems.

On the collaboration of academia and industry:

While recognizing that collaborations between industry and academia have been sparse in India, he states that contrast in the two approach builds value and needs to be celebrated. The industry approach is to first create solutions followed by patents and publishing, while in an academic setting it is almost the reverse with a major focus on publishing papers, sometimes patents with solutions not really coming under the gambit. For educational institutions, he advocates for collaborations between faculties to solve multi-disciplinary problems and anchoring of student projects so that ideas aren’t lost when they graduate.

An industry tie-up will also help in solving some of the massive country-level problems which need multi-directional approaches. He quotes the cleaning of Ganges as a problem which could be solved with such an approach. Breaking this problem into actionable plans, finding the right stakeholders, arranging for funds, building sustainable solutions and monitoring systems should help in solving this problem. In areas of development such as infrastructure, pollution, maritime & port and solar power proliferation there need to be priorities set within the space. He classifies these more of a policy issue than a technology issue.

On product development and product ideation:

“Any organization that starts afresh will initially have a lot more ideas and can expect only a low percentage of it to go into fruition”, says Dr. Aloknath De, CTO, Samsung R&D Institute, India.

Talking about the time lag between ideation and its application into product development Dr. Aloknath feels that a significant lag is only natural. In any fresh research institute, the birth of new ideas would be 10-20 times greater than the success rate of those ideas. An idea encounters many hurdles during its development, say monetary issues, testing for safety and efficacy, product-market fit and sometimes even policy interventions.

However, as the setup matures, its aim should be to optimize these lags so as to reduce wastage of resources and provide a vivid picture for investors. Dr. Aloknath believes that most initial projects will only get partial success (unless you are the best in the world) and maintains that solving a deep problem or a multi-disciplinary problem is a much better strategy.

On the pervasive patenting at Samsung R&D:

Having been the CTO of Samsung for over 7 years now, he reflects on how they have shifted from designing and developing passive technology to active technology. With the advent of AI and the cognitive drive, technology has started to respond and react, thereby creating a more challenging task for the developers.

With regard to the research output in India, Samsung R&D boasts of the highest number of patents filed with about 300 patent applications per year. With the mindset of improving the quality of inventions in Bengaluru R&D center, Samsung conducts basic invention creation training, advanced inventive step training, and training for top-quality invention creation. Since 2012, over 90 patents have been filed which fall under the category of high technical complexity and business impact.

On his philosophy of leadership:

While upholding Samsung’s philosophy of “Inspire the World, Create the future”, Dr. Aloknath leads with his own philosophy of “Technology on SciArt, Technology of Value, Technology for All”. He believes that everybody should be empowered with technology that is based on the fundamentals of science and beauties of art and the value for which is given by the recipient.

As a CTO of a huge company like Samsung, Dr. Aloknath is at the intersection of the crossroads of business, technology, and research. He appreciates the roles of fundamental science as an exploration of nature, applied science in transforming these natural understandings into technology, and business in innovating this technology to meet our needs. Nature-based learning is translated into technology and this technology, in turn, is transformed into a pragmatic use case solving human needs.

Development of robots, for example, is a multi-faceted problem. One part of it is an engineering problem and the rest, a natural science problem. With the knowledge available, engineers can build a robot which moves in a certain way and does certain tasks but a deeper problem like collaborative robots needs a psychological understanding of interactions where participation of researchers from that field is necessary.

To end it all, Dr. Aloknath shares with us an aphorism in which he truly believes. He firmly agrees that with technological advancements we have taken long strides towards prosperity and community building. However, he calls for wisdom in knowing when and how to use the technology we develop!

The need of the hour is to adopt quantum computation to step up the computation game, to handle enormous amounts of data that has become an intergral part of the 21st century 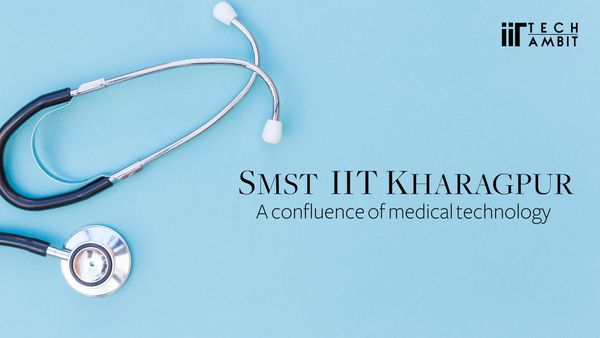 In 2001, The SMST came into existence as a confluence of a medical school and an engineering school where both- the clinical aspects & the technology behind medical devices would be undertaken