Humans have been trying to crack the genome code for decades. Early breakthroughs in the form of genetically enhanced crops helped spur the Green Revolution. However, no significant advances have been made since then that could be commercialized and put to broader use.

Two teams of researchers, one comprising of biologists at the Tufts University and the other comprising of computer scientists from the University of Vermont, are trying to show a different way. Their latest studies show that we could build living organisms. These Xenobots, synthesized in their laboratories, require no gene editing. Instead, they are programmed to carry out the desired functions. This unprecedented collaboration has already produced startling results and could well prove to be groundbreaking.

Cells extracted from embryos of the African claw frog Xenopus laevis(thus the name ‘Xenobots’), when left undisturbed, seemed to develop new ways to deal with their own multicellularity. They came together to form an aggregate and developed cilia(paddle-like extensions) on the surface. These features allowed this pseudo-organism to swim in water. It even allowed them to change the direction of motion without any external influences.

Another key feature of these structures was that they could heal themselves. The team at Tufts went to the extent of cutting these organisms almost in half, only to find that they could stitch themselves again and go about as if nothing had happened.

These novel observations opened new avenues for research. It showed that a set of cells could be made to perform specialized functions without editing their genetic code at all!

After these remarkable properties of frog cells were observed at Tufts, computer scientists at the University of Vermont ran these rudimentary multicellular structures through an Evolution Algorithm. Using the Deep Green supercomputer, the team at UVM simulated these pseudo-organisms under random environmental conditions. These simulations were analyzed using an evolutionary algorithm, which selected the best possible structures that would work in a given environment to perform a specific task. These computer-simulated organisms were then synthesized in the laboratory.

Xenobots thus created are less than a millimeter in diameter. They are a completely unique form of life on the entire planet. Even though their individual cells had a physical evolutionary history, the whole organism evolved virtually and came into being without undergoing any developmental stages of evolution.

One of the remarkable specimens synthesized in the labs at Tufts is the Xenobot that can move towards a desired target. This is achieved by combining tadpole skin cells and cells extracted from cardiac muscles. These cardiac cells were programmed to expand and contract systematically to produce a forward thrust.

The groundbreaking invention of xenobots has stirred up an age-old debate on the ethical limitations of science and technology. It raises important questions about where we draw the line between living and non-living objects? With the invention and further development of these ‘programmable organisms,’ can we say that humans have started harnessing the powers of genesis? Do these developments raise doubts about our own origins? Will xenobots be eventually able to naturally evolve like trillions of organisms have on Earth? Would artificially created organisms compete with humans in the ecosystem?

Such open questions are subject to widespread speculation. However, for the time being, the debate rages on...

Scientists have developed newer versions of xenobots that can collect pollutants such as microplastics dissolved in a medium, which are ordinarily very hard to filter, and stack them to form macroscopic balls which can be easily extracted. Such techniques can be used to supplement the cleaning of water bodies. Being made of living cells, xenobots themselves do not cause any form of pollution and are entirely biodegradable.

Applications in medicine are still in the very early stages of development. As of now, only frog cells have been used to synthesize xenobots. Future bots made from human cells can be used to deliver drugs and proteins to targeted areas in the body, bypassing its natural immune response and helping patients recover faster.

Many more applications are sure to come up as the technology gains ground, and xenobots that can perform various functions come up.

Further developments in xenobot technology can potentially cause a paradigm shift in how modern medicine works and can lead the way as the planet prepares to counter the effects of Climate Change. 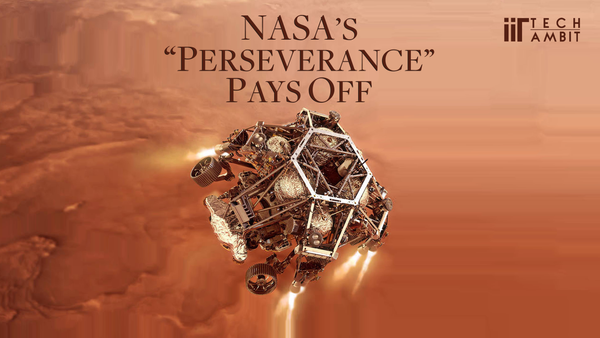 On April 20, NASA’s Perseverance rover successfully generated breathable oxygen on Mars using an instrument called MOXIE. The success of this mission is crucial for future missions involving the human exploration of Mars.

From a research lab in IIT Bombay to India's most energy efficient ceiling fan we take a look at the interesting journey of a startup which went on to receive appreciation from Prime Minister Narendra Modi even before disrupting the retail electricals space.