Last year was challenging for everyone. Everything became still and hopeless. But yet many people started again on their journey despite all the hindrances. Achieving the best out of difficult situations makes a person ready for future challenges. One of the most suitable examples for this is the IIT Bombay Racing team. In the face of the difficulties of the online semester, academic load, and no physical communication, IITB Racing outperformed Formula student UK by achieving 1st position in Concept class. It shows that by determination and hard work, anyone can surpass the biggest hurdles life can put before oneself.

IITB Racing started its journey in 2008 with only ten members but lots of passion. After 13 years, they created a family of more than 70 members from diverse disciplines and specializations. Every year they transfer their knowledge to new members. After its inception in 2008, the team developed many vehicles and performed incredibly in many international competitions. But the breakthrough for the team was when they stepped into the world of electric cars in 2012 and participated in Formula Baha. After that, the team never looked back. It also led to their most significant achievement when they participated in FSUK 2019, secured 4th position overall, and became the first Indian team to do that.

The nitty-gritty behind the car

The vital part of an electric car is the Electronic control unit in the electric division. It constituted of the motor, the motor controllers, and the battery to drive the motor. The motor provides torque to the system. As the motor’s torque drives the vehicle, we can say ECU is the brain of the electric car.

Three other subsystems include accumulator management, high voltage safety, and low voltage safety subsystems essential to protect the battery, different electric circuits, sensors, etc. The fifth subsystem in the electrical division is DAQ-CAN, which works as a communication interface for the sensor signals.

Similar to electrical systems, the mechanical division also includes multiple subsystems. The most crucial subsystem in these are Brakes, Aerodynamics, Electronic differential, and Accumulator.

As Brakes are essential for the safety of drivers, it plays a critical role. The team used disc brakes for that task. The Aerodynamic subsystem deals with the performance of the car and the flow of air on the vehicle’s interface. The role of the Accumulator is to safeguard the battery. The accumulator uses composite material for the extra safety of the battery.

The other subsystems in the mechanical division are suspension for tunability of vehicle, chassis for the skeleton of the car, wheel assembly for efficient transfer of power, and vehicle dynamics to optimize the design for better performance.

The non-tech subsystem includes marketing, creatives, and finance. These subsystems are responsible for sponsorships, cost reports, poster design, merchandise design, social media handling of the team. They also publish a magazine based on news related to the racing community.

The primary competition in focus for the team is Formula student UK. The event is organized every year in July by IME(Institute of mechanical engineers), and teams from around the world participate in it. This competition includes static events and dynamic events. The static event involves business plans, cost reports, and engineering design. At the same time, dynamic events encompass acceleration, skidpad, autocross, and endurance. This events checks for the durability and reliability of the vehicle. By these 4 analyses, Judges decide the winning team. One of the most challenging tasks is to clear the endurance test, in which a car has to complete 22 laps without any difficulty. Completing the endurance test is a whole big achievement for a team.

Because of the Covid-19 pandemic, the possibility to held dynamic events was difficult. So in the last two years, events were organized in both online and offline modes. FSUK relaxed its rules for participation and only considered static events for the teams unable to compete in dynamic events. The static event involves the business plan, the cost report, and the design of the vehicle.

Sprinting through the hurdles

IITB Racing keeps itself punctual with its targets. Every year they start their journey in the 1st week of August. The first step in their journey is the concept phase, in which they set targets for next year, works to innovate previous designs. Then they work upon the CAD model of the car. This task is completed by the mid of September. After that, they start with the manufacturing process; They try to do it by building on their own, giving vendors to build or buy directly from outside. They aim to complete this task by February. They also take help from their sponsors in providing the best industrial material. After that comes the validation and testing part. For validation, they use the IITB alumni network. There are many industry experts from IITB who take part in this journey with them. Some professors from IITB also involve with them. And after that, the team gives most of its time, nearly 4-5 months in the testing phase. This phase gives them a better perception of their vehicle. They get to know about most imperfections and flaws in this phase only.

The above mentioned is the typical timeline of the team, but the pandemic disrupted everything. Initial weeks of the pandemic, many activities in the institute got stuck. No team meets, working on the vehicle was stopped, and nobody knew when everything would be the same. But IITB Racing never liked stopping; they started again. With new guidelines from FSUK, they focused on static events and dedicated most of their time to that. In few months, everything came again on track. The team conducted regular meetings, game nights, and bonding sessions to cheer up team members from exhausting academics. And all the hardships and struggles became nothing when the team became the first Indian team to win in the engineering design competition in FSUK 2020 and grabbed 4th position overall.

But this was not the end, and the team moved ahead with more determination to perform better in FSUK 2021. Learning from FSUK 2020 experience, the central focus for the team was to keep morale up among team members and make communication effective. They also made a separate division of students to focus on the team’s business model, concentrating on static events only. And yet again, they proved that anything is possible if we are determined and consistent with our task. They gave their best performance in FSUK 2021 by becoming the overall winner in the concept class, which involves static events. They came 1st in design, 4th in business, and 10th in cost and manufacturing among 65 participating teams worldwide.

We do what we do best. We improvise.

For their next milestone, IITB Racing is changing its timeline because of less time availability for the testing phase. In the new timeline, they follow the same timeline, but for the testing phase, they will give a whole year to make sure that any defaults or deformities are resolved before the event only. This way, they will participate in the first year with last year’s vehicle with some improvements but primarily focus on their 2nd-year event. Institute called students from such tech teams to start working on their project physically. Few members of IITB Racing have returned and started working on the car for their next target. They also thinking to build a separate subsystem for autonomous activities, keeping in mind future advancements in the automobile industry.

The race car shapes the engineer

Bharat is working with the team for 3.5 years. He joined as a trainee in his first year because of his interest in cars and automobiles. And now he is the Team leader for the year 2021. According to him, working with the team and handling unpredictable situations helps in a person’s overall development.

IITB Racing has a notable contribution to the industry. They create industry-ready engineers with the inclusion of various industrial tasks at the college level only. Many people from the team are working in renowned companies like Tesla and new Indian electric vehicle startups like Ather.

An improved version of the medical-grade oxygen manufacturing plant based on the Pressure Swing Adsorption Technology developed in collaboration with IIT Kharagpur. 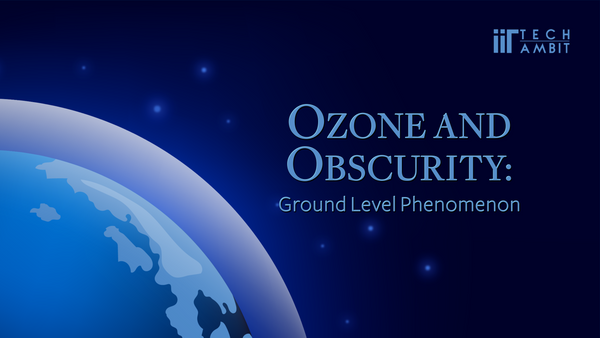 Stratospheric Ozone is essential for human sustenance. But what happens if ozone starts accumulating at a lower altitude? Perhaps us humans should start inspecting our impact on nature, and how it can have dire consequences if not inhibited. Read on a comprehensive account on this regard.